CYANOTYPES
Working widely with ‘alternative’ photographic techniques the artist Shiva Lynn Burgos revisits the historic process of cyanotyping.
First used nearly 150 years ago, the cyanotype was formerly described as a shadowgraph by Anna Atkins, the pioneering and perhaps first known female photographer to document her findings in the natural world; Photographs of British Algae :Cyanotype Impressions.
The process involves painting a ferric salt solution onto watercolour paper. Placing the subject then exposing to sunlight or an ultra violet light source results in the brilliant Prussian blue hue. The spiritual and celestial colour provokes an ethereal and emotional attraction.
The painterly, alchemical ritual involved in the production echoes her experiences imbedded with the Kwoma people of Papua New Guinea. The artist has been inducted into the Kiava clan where art-making is connected to the ritual washing of objects to attract the energy of spirits and ancestors. The resulting series POWER, PROTECTION, CURRENCY is a device to capture the shadow energy of precious objects the artist was given or collected in Papua New Guinea.
For example, the feather crown of her father Chief Colin, amulets, bones, shell money and pre-historic stone tools.
The interactions between chance, intuition, and inductive logic are inherent. The objects themselves are represented by a lack of colour and manifest as negative space. We are confronted by the absence of the object and therefore, the artist reminds us of the temporality and fragility of indigenous cultures themselves.

Shiva Lynn Burgos is a contemporary artist and photographer from New York currently living and working between Paris, London and Papua New Guinea. Her diverse contemporary, conceptual and collaborative practice is positioned within the unifying concepts of evolution, competition, natural and social selection. Burgos’ works encompass photography, film, 360 Virtual Reality, sculpture, installation, painting, drawing, tapestry and performance as well as an ongoing passion for experimental and digital image making.
Shiva Lynn Burgos is the first international contemporary artist to work in Mariwai, a small Kwoma village located on the Upper Sepik River, Papua New Guinea. She has returned annually following her first trip there in 2013 and has created The Mariwai Project, an arts project and cultural exchange with the indigenous artists to include philanthropic support for art, culture, health, education and development in the region.
Burgos integrates field collected and found objects with contemporary materials as a resource for examining value systems in relation to currency, spirituality and custom. The artist bridges her knowledge of this living culture with authorities in the field of anthropology, museum collections, government agencies and art market experts who define the value systems for tribal and indigenous art in order to recognize these communities and cultures within the greater international consciousness and due position within contemporary art.
The work is currently on view in the permanent collection of The Ethnologisches Museum, Humboldt Forum, Berlin and has been recently exhibited at The Bath House of the Winds, Museum of Modern Greek Culture, Athens GR. Contemporary Arts Center New Orleans, USA. Manifesta 13 Marseille, Les Parallèles du Sud, FR. Les Recontres d’Arles, Arles, FR. Le109, Nice. Centre d’Art Gallifet, Aix-en Provence . AORAspace.com 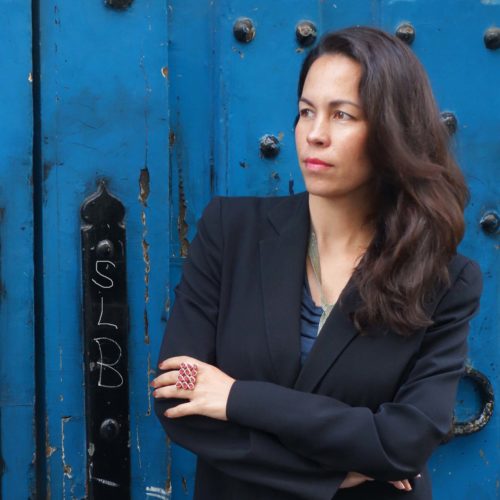