DAMIEN SORRENTINIO (F) . A versatile artist, Damien Sorrentino enjoys crossing genres and disciplines. His experimental approach to music and sound led him to develop different programming and listening systems (Résonateur, 2003; Radio cigale, 2004; Silence radio, 2004; Réalité fragmentée, 2007; Antenna project, 2009; Boïdspat, 2009) which appeal to the senses of the public and question its status as spectator (Banc de sardines, 2004). His works also attest to a sensitivity for territories, landscapes, limits and variations, both visual (Guo Ban, 2009; E5, 2009; La raison voir trouble, 2009) and topographical (Extrusions photographiques, 2007; Banksters territories , 2008). Attentive to the abstraction that a medium that is supposed to represent reality can take on, maps are as much a way of finding one’s bearings in space as of getting lost. Against a backdrop of humanitarian and ecological crisis, Sorrentino takes a critical look at the world (Zones of Relative Autonomies, 2009; Oasis project, 2010). This dimension is reinforced when it combines the neutrality of a plan or a satellite image with the dramatic content of the situations to which these representations refer (Acupuncture et cartographie, 2008). When questioned about the absence of a human being in his photographs, he explains that abandoned and abandoned spaces are possible places of renewal in which the artist, facing an infinite, can refocus. Damien Sorrentino will create an audio performance specially conceived for this event. 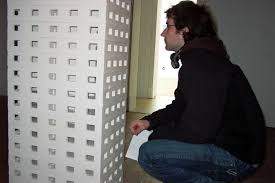